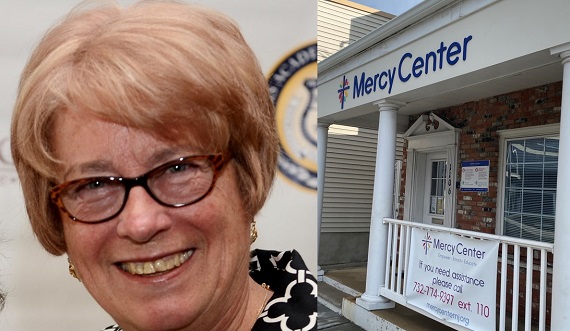 Mercy Center announces the retirement of Sister Carol Ann Henry from her role as Executive Director, effective June 30, 2021. Mercy Center will move forward with Sister Carol’s vision after her 39 years of service to Asbury Park.

Sister Carol’s journey to Asbury Park began in the early 1980s, when she saw that the city by the sea was suffering. “After meeting with members of the city council, it became clear there was a great need to help people who were hungry and battling mental illness – many of them living in the city’s overpopulated boarding homes,” said Sister Carol.

In 1986, with a loan from the Sisters of Mercy, 1106 Main Street was purchased and Mercy Center was established. Mercy Center’s Emergency Services was its first program that offers food, clothing and utilities assistance in order to help sustain families facing financial difficulties.

After ministering for nearly a decade, Sister Carol became aware that Mercy Center was now serving the daughters of the women she had helped years before. “Generational poverty was evident and the cycle was repeating itself within families,” she added.

To address these concerns, Sister Carol researched new ways to help families and empower young women to become self-sufficient. “I was convinced that appropriate guidance for families and an education of excellence for young women were the best ways to create systemic change,” she said.

Under the leadership of Sister Carol, Mercy Center is now a comprehensive social service agency that includes a Family Resource Center (FRC) and Sisters Academy of New Jersey (SANJ), both of which were created in 1997.

Mercy Center’s Board of Trustees, dedicated staff and committed volunteers supports Mercy Center and its many programs. Looking to the future, Mercy Center’s Board of Trustees is in the final stages of selecting its first new Executive Director since the nonprofit’s inception. “We are forever grateful to Sister Carol for recognizing the need to serve the City of Asbury Park,” said Mary Beth Radke, Board Chair of Mercy Center. “Each day, Sister Carol impacts lives through her kindness, compassion and understanding of the needs of the people we serve. We are all truly inspired by Sister Carol’s decades of service and wish her the very best as she embarks on the next chapter of her life.”